There are very, very few organisms with scientific names familiar to the general public. So I was actually pretty psyched to find that Drosophila is familiar enough that it's in the spell checker dictionary. There's a reason for that, of course, and it doesn't have anything to do with wildlife. Drosophila melanogaster is the "fruit fly" that's been used in thousands of laboratory experiments over the years. Lots of people have gotten to see them in high school or college labs, crawling around in little tubes with food in the bottom. 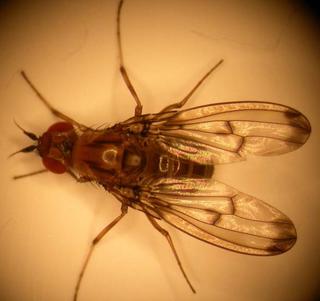 D. melanogaster may be the popular member of the genus, but it's got a lot of company. This single genus contains an enormous number of species - well over 1000 have been described to date, and there are hundreds of species that have been collected but not yet described. There are species of Drosophila known from all over the world.

Many of them are native to Hawaii. Millions of years ago, a single species of Drosophila arrived in the Hawaiian Islands. The population that arrived was very small, perhaps as small as a single fertilized female. From that small start, an amazingly diverse fauna has evolved. Hundreds of species have been described to date, hundreds more have been collected but not yet formally described, and there is now way to know if we have discovered all of them yet. 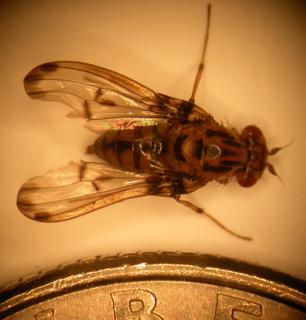 The pictures show two of the species from one of the better-known groups of native Hawaiian Drosophila - the "picture-winged" group. These flies are giants among Drosophila - almost as large as house flies. The two flies pictured here are both about the same size, and the picture on the bottom has the edge of a quarter for scale.

The top picture is Drosophila silvestris, and the photo on the bottom is Drosophila heteroneura. Both are endemic to the island of Hawai'i (the Big Island), and both are usually found living in the same locations. They are closely related species, and can hybridize in the lab, where they yield fertile and vigorous offspring. In nature, however, they do not appear to interbreed.

Both pictures were taken with a 4MP Cannon digital camera, shooting through a binocular microscope at 6.3x.
Posted by TQA at 7:25 PM

Did you see the Drosophila on Snail's Tales? That one looks like it is in its native element: hard cider.

I'm glad to see someone else trumpeting the glory of the Drosophilds, but I'd like to point out a couple of things.

First of all, calling Drosophila "fruit flies" is a misnomer. They are ecologically diverse, and none of them reproduce on living fruit -- they tend to prefer rotting fruit and yeasty envirnoments. This confusion has led to Drosophila getting a bad name, when, in reality, Tephritid flies are the real enemy.

Secondly, it's great to hear people talking about a species other than D. melanogaster. Sadly, one of the great pioneers of hawaiin Drosophila research (Hampton Carson) past away within the past year. I'm afraid that a lot of the interest in (and knowledge of) hawaiin Drosophila died with him.

I'd also like to point out the amazing genetic diversity of Drosophila. There is actually more diversity within the genus Drosophila than in the entire class mammalia! That, of course, means that we should devote as much funding to Drosophila research as we do to mammal research.

Yes, I am aware that calling Drosophila "fruit flies" is a misnomer. But it's such a common misnomer that I didn't want to run the risk of confusing things by correcting it.

Hampton Carson is certainly going to be missed, but interest in and research on the Hawaiian Drosophila continues. In fact, the two flies pictured in the post come from the lab of Ken Kaneshiro, who was one of Carson's grad students, and succeeded him as the head of the Hawaiian Drosophila project when he retired some years back.

This is a great site and i would highly recommend link in
MAMUŚKI
and BUSTY-PL -
Free pics and movies! - BOOBS-PL
I like your blog.You have a great blog! Keep up the great work,
and I'll be sure to visit regularly.