Work and a Blogger issue have kept me offline for the last day or two, and lots of other people have weighed in on the latest Bush administration attack on science, but I still wanted to throw in my .02.

The Bush administration apparently gave some political idiot with no experience or background in science a job as a public affairs hack at NASA headquarters. From this position, idiot-boy has seen fit to try (with a notable lack of success) to muzzle a well-known climate scientist, and to make sure that the NASA website doesn't do anything to piss off creationists.

The irony of all this going on at the same time that Bush is wandering around talking about the need to improve our standing in science is impressive, but that's really all that's remarkable about this event.

I'm pissed off about it, but entirely unsurprised. This is just the Imperial Presidency in action again. The sole mission of this administration right now is to make the president look good. Everything else comes later. We've seen it with regard to the warrentless wiretaps (sorry, I forgot, that's been rebranded as "terrorist surveilance"), we've seen it with Iraq, and we're seeing it now with science.

It's bad. It's fundamentally wrong. It's scary. It's threatening our democracy. But it's not a surprise.
Posted by TQA at 7:27 PM 3 comments:

Tangled Bank 46 is now available at the new Adventures in Science and Ethics digs. Enjoy.
Posted by TQA at 8:46 AM No comments:

Wesley Elsberry, over at The Austringer, posted a link to a cool little test of reflexes. I blew about ten minutes on it, and found that it was difficult to make it past five seconds. Interestingly, though, I also found that if I could make it past the first five seconds, I would almost always survive for longer than 15 seconds. (Best time: a little over 22 sec).
Posted by TQA at 7:57 PM 7 comments:

There's an invitation, over at Radio Open Source, for bloggers to write their own version (BOTU) of the State of the Union address. It's a last minute kind of thing, so we get a few minutes or a couple of hours to pound out our attempts at something that the White House spends months at.

Today, more than at any other time since the Civil War, America stands divided. Half of all Americans, it seems, can almost always be counted on to have an opinion strongly opposed to the other half. The divide seems to stretch across almost every aspect of our culture.

We did not seek to become a nation divided, but that is what we are. The divisions have deepened in recent years, and at times it seems that the gap is unbridgable. But bridge it we must, for, as Lincoln said, "A house divided against itself cannot stand."

We cannot fail to close this gap, for if we do we will be faced with a crisis worse than what Lincoln was faced with. At that time, the divisions in the nation cut cleanly across geographical divides. Now they do not - colors on the map may paint a picture that looks clean, but these divisions run deeper, and they run through the middle of areas that are painted a single color on televised political maps.

How we choose to deal with this the divide will define our nation for years to come.

We have, at this moment, a choice between two paths. We can continue down the path that we have been - a path of ten-word policy soundbites, a path where distorting the arguments of your opponents is the norm, a path where every policy decision is treated as a win or lose contest by the two main parties.

That is the path to national destruction, but we can continue along it until it reaches its end. We can choose to fail.

It will require us, most of all, to truly recognize that a diversity of ideas and ideals is a strength.

It may require us to compromise with each other, but it need not. Bipartisanship can be good, but sometimes a partisan position is the right choice, and sometimes it is better to pick one position than to try to blend two radically different approaches. The right choice will be different at different times, and on different issues.

We need, in short, to do nothing more than to recommit ourselves to a system of government that recognizes the value of opposition, and the strength of diversity.
Posted by TQA at 8:41 AM 1 comment:

There's nothing in the world like being a biologist on a beautiful Sunday in Hawaii.

One of the other grad students in the lab, Lindsay, is doing her dissertation work on the Laysan Albatross, and offered to show the rest of us her field site at Kaena Point. For those of you who aren't familiar with it, Kaena Point is the northwestern tip of Oahu. A fair amount of the tip of the island is a nature preserve, with good reason. A number of seabirds have breeding colonies there, Hawaiian monk seals are frequently seen on the beaches in the area, and there is a great deal of native vegetation. Oahu's environment has been massively disturbed by humans, and Kaena Point is one of the few natural areas left that hasn't been entirely ruined by human contact.

Lindsay is keeping tabs on this particular colony, checking on the progress of nests and eggs, figuring out which birds are mates, and who is responsible for which nest, and other such things. The rest of us were there partly to assist her and partly to sightsee.

This group of birds are the unmated crowd. They haven't yet been able to successfully mate, and are just hanging around the edges on the colony. Most of these had run across Lindsey before, and had the leg bands to show for it. Another couple did not, but took off before we got close to them. One wasn't so lucky, and got grabbed.

Kim's holding the bird for Lindsay, who is taking a blood sample. Nori is all set to apply pressure to stop the bleeding. The blood sample will be used for genetic work later on. (It's so much more fun doing the population genetics for a real population than it is working on things that only live in the lab.)

Lindsay and Kim take a second to pose for a picture with the bird. The bird is now wearing a pair of leg bands, and has donated a small amount of blood to further scientific advancement. Everyone looks so nice and calm. Even the bird almost looks content in this picture. It looked so nice and easy I figured I could give it a shot the next time. As it turns out, I was mistaken. 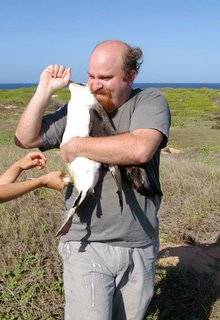 Yes, that is birdshit on my pants. A couple of minutes after that shot was taken, the bird managed to wiggle its beak free and take a couple of nips out of me. Lindsay got her blood sample, but I think the bird got more of mine.

By the time we got back to the parking lot, I was hot, tired, and sweaty. I had mud and birdcrap all over my clothes. I had a bit of sunburn on my face, except for a couple of little patches where the band-aids covered up some bird bites. I had scratches on my arms from albatross claws and from thorns. And I was totally and completely happy.

It wasn't just because we had seen monk seals and humpback whales, either. The charismatic megafauna are fun to look at, and it's nice to get some pictures of them, but the real joy comes from something else.

I'm not sure how to describe it, either. I think the closest I can come is that it's the joy of the active persuit of knowledge. It's what Feynman called the "kick in the discovery" and "the pleasure in finding the thing out." It's knowing that even if this isn't your project, your research, you are still part of something more than just a walk on the beach. It's wondering what makes things tick, and how this little piece fits into the puzzle of reality. It's the knowledge that no matter how much gets figured out this time, there will always be something else to learn later on. It's the childlike delight in poking at something just to find out what happens if you do. Being a part of the neverending story of science is just plain fun, and words alone simply can't do it justice.
Posted by TQA at 5:14 PM 1 comment: