A Quick Guide To News "Licenses" For Viral Photos and Videos

This is going to be a quick and dirty post; I'll try to clean it up later.

This is 2020 and it feels like we're getting a decade of news every few hours. We all have phones, and sometimes we get photos and videos of newsworthy events and post them to social media. Sometimes the traditional media sees and wants to use those photos and videos. If that happens, you might find requests from media organizations to use your material.

Whether or not you want to respond to those requests is your choice. And even if they're not offering money (they're probably not), you might decide you want to let them use it anyway. That is totally your call, and I am not writing this to try to influence your decision.

However, you might want to keep one thing in mind: if they didn't think your material had value, they wouldn't be asking to use it.

But some of the requests I've seen lately from media organizations have strings attached. They aren't just asking permission to use the material; they are asking you to agree to terms and conditions. Yes, you read that right. They will ask you to agree to a contract with legal language in exchange for using your material, usually without offering to pay.

If someone wants to use your material and they want you to sign a contract, you should very very strongly consider reaching out to a lawyer for legal advice.

If you are not going to do that, you ABSOLUTELY should READ EVERY WORD of whatever they are asking you. And you should make sure you understand it before you agree.

In the rest of this post, I will provide a VERY BASIC explanation of some of the things you might find in one of the requests. By "very basic" I mean just a plain language explanation of what the clause does. I am not going into detail about how enforceable the terms might be or anything beyond the most simple details. Contact a lawyer for more.

I will use examples that have appeared recently from real news organizations.

Before we start, three quick points:

3. If you refuse permission and they use it anyway, call a lawyer as soon as you can and get real advice. They may decide that they can use it under fair use, but they will be taking a big risk by taking that approach.


Let's look at examples.
Sometimes, the news organization will make the request without trying to add additional terms.

"Hi this is Dominique from WNBC News 4 NY. Hope you're safe! Did you record this video? If so may we have permission to use it on air, across all platforms, and to share with our affiliates with credit to you?"


Even if it's just a tweet, read it carefully - because saying "yes" does a lot more than just let News 4 NY use it on the late local news.

"Did you record this video?" is how they are checking to see if you are the copyright owner. Lying in response to this question is a BAD IDEA.

"with credit to you" - here, they're at least offering credit. That's not a given. They are not offering money.

Hi Pierre. This is Eyewitness News. Did you take this video or do you otherwise own all rights to it? Do you agree WABC and its licensees may use, edit & distribute it without restriction in all media per these terms https://7ny.tv/2YEJCI5? If so reply YES

This uses different language, but it does a lot of the same things as the last one. But this one you need to read even more closely.

"Did you take this video or do you otherwise own all rights to it?" - again, lying is bad. Unless you are a professional and really know what you are doing (in which case you're probably not reading this), it would be very risky to assume that you "otherwise own all rights" to videos or photos you did not take.

"Do you agree WABC and its licensees may use..." - this is similar to the "share with our affiliates" from the example above, but it's broader. This gives WABC permission not just to use the video within the ABC family, but also to charge other people to use your work on their terms, without paying you.

"edit" - this, as my English friends say, does what it says on the tin. They want permission from you to show edited versions of your video. They will not be checking with you to get your approval of their edits.

"distribute" - I'm not going to go into the difference between "use" and "distribute" in something this short and informal.

"without restriction in all media" - this is potentially broader than the "across all platforms" thing from the one above. Let's say that ABC later decides to do an archive collection of all the 2020 riot material. They can include it in that without further permission from you (or payment to you). (The "across all platforms" might be broad enough to let them do that too.) (A lot of these tweet-wrap licenses have terms that aren't the kind of thing a lawyer would recommend you agree to because they are so vague. Which is why getting in touch with one before agreeing might not be a terrible idea.)

Here's the link for the click-through, and a screenshot:
https://abc7ny.com/submit-news-videos-photos-to-wabc-tv/5161087/ 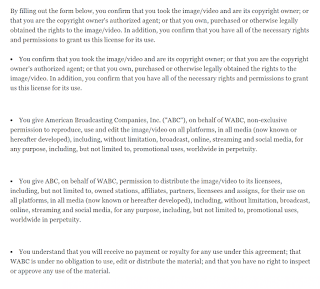 That's a lot of text to agree to.

Also, nowhere in there do they promise to even give you credit.

Oh, and if it turns out that you didn't own the copyright, and the person who does sues them, they can maybe try and use this to go after you for damages.


One final example:
This image is something that the Associated Press tweets at people as part of the permission request. 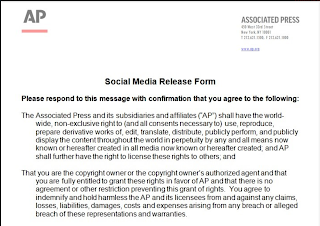 This is the densest lawyer language of any of them. I am not going to define all of the terms here. I will say this much:

The top paragraph contains everything the other ones contained as far as the rights go, plus way more. Theoretically, if you agree to this and the AP wanted to, they could sell t-shirts with screenshots from your video. Or they could sell someone else a license to do the t-shirts. Or posters. Or whatever. (That's the effect of the "derivative works" language.) And, yes, that's very very unlikely, but not impossible.

The bottom paragraph is you agreeing to pay all the AP's expenses and damages, including their legal bills, if there's later a dispute over whether you owned the copyright. That's the effect of the "indemnify and hold harmless" language.

I would personally never sign a contract with an indemnification clause if I wasn't getting money.

Like the ABC agreement, there's nothing in there that would make them even give you credit.


I have not been able to go into nearly enough detail here, but I hope you see that these agreements give away far more rights than just the right for a news station to put your video on the nightly news. Most of the agreements involve you agreeing to receive no money and them not promising to even give you credit. And some of them involve you incurring financial risk.

I hope, if you've read through to this point, that this convinces you to AT LEAST read these things carefully if you are ever asked to agree to them, and to contact a lawyer - or just say "no" - if you are in any doubt as to whether you want to agree to a lot of terms and conditions in order to give news stations something of value in exchange for nothing.
Posted by TQA at 5:20 PM No comments: 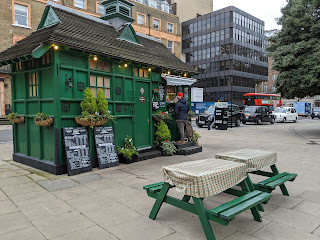 There are two places to eat in Russell Square: Caffè Tropea inside the gardens, and the Cabmen's Shelter on the Northwest corner. Caffè Tropea is a lovely cafe, but the Cabmen's shelter is by far the most fun. If you're not a cab driver, you can't go in - so you wait for your food at the window, while the drivers chat and laugh with each other and whoever is doing the cooking. (So many cab drivers can fit in there at one time that I strongly suspect it's bigger on the inside.)

The food is best described as "hearty." "Mostly fried" also works. But the prices are reasonable, and it's a great way to get your daily grease allowance. The prices, at least in terms of finance, if not health, are more than reasonable. And, of course, it's as genuine London as you'll find.

I absolutely love the place.
Posted by TQA at 1:56 AM No comments:

This blog is moving - but where?

If you read this, it will probably be because you followed a link in a Tweet that was originally sent from an account with about as elegant a presence as this blog currently has. I'll be putting a banner on that profile sometime later this week, so maybe next week, and getting a profile pic up and all that good stuff. But I'm not going to waste time doing much here, because I'm moving.

Question is: where? Wordpress or squarespace.
Posted by TQA at 1:42 AM No comments:

A New Post. That's A Thing Blogs Have, Right?

This one hasn't had enough of them lately. I really haven't abandoned this. It's more of a slight downturn in posting frequency, due to other obligations.

I was going to get something out there today, but Brexit has literally interfered with that. There's a thing as work that shouldn't need to happen until next week, but out of an abundance of caution needs to happen today instead. Just goes to show that even though there's not a huge amount of practical change that will happen late tonight local time, it's still capable of being a pain in the ass.
Posted by TQA at 12:08 AM No comments: