Now that I've had a few days to get caught up on work, I've finally got a little time to sit down and go through some of the pictures from my Maui trip. I'm going to post some of the more interesting ones here from time to time.

The first picture, below, was taken on 30 October 2005, on the Sliding Sands Trail inside Haleakala Caldera. Haleakala Caldera really cannot be adequately described. It is an almost completely alien place, a landscape that looks more appropriate to a Sci Fi movie than to anything on Earth. 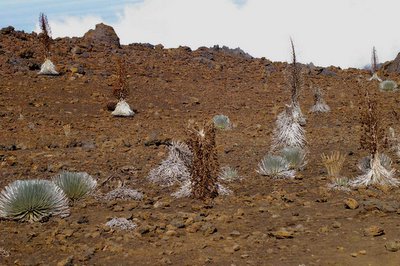 The plants in this picture are Haleakala Silverswords (Argyroxiphium sandwicense ssp macroencephalum). This subspecies is only found high on the slopes of Haleakala, and within Haleakala Caldera. It is federally listed as an endangered species.

The plants in the lower left of the photo show the normal form of the plant. The silvery appearance of the leaves is due to fine, reflective hair-like projections that cover the leaves. These reflect light, protecting the plants from the high intensity solar radiation that they receive, growing as they do at high altitudes and tropical latitudes. The individual leaves are small and narrow, minimizing water loss in this dry, windy environment.

The Haleakala Silversword has what is known as a monocarpic life history. This means that the plants grow for several years (up to 20 in the case of the silversword) before producing a single flowering head. After flowering once, the plant dies. Several of the plants in this picture have recently flowered, and are dead or dying.

A. sandwicense is part of a group of endemic Hawaiian plants known as the Silversword Alliance. This group consists of the genera Argyroxiphium, Wilkesia, and Dubautia, all of which are the descendents of a single species that arrived in the Hawaiian Islands, probably from North America, millions of years ago.

More information on this species can be found at Wikipedia.
Posted by TQA at 9:21 PM No comments:

Losing what little respect I had left for Kerry.

For the record, I voted for Kerry. I wasn't thrilled with the man, but I thought he was a far better choice for president than Bush. I really, really, really wish he had won the election, and the fact that I have lost a great deal of respect for Kerry since then should not be taken in any way, shape, or form as implying that I am supporting Bush in any way, shape, or form.

Since the election, I have been steadily losing respect for Kerry. I donated a small amount of money to his campaign, and as a result, I am on an email list for direct email from him. The fact that he lost has not discouraged him from sending repeated emails out to this list in recent months. For some reason, the emails since the election seem to be pushing views that are a bit to the left of where he was when he was running. More and more, he strikes me as a politician in the mold of the legendary French radical who saw the crowd go by and said, "There go my people. I must find out where they are going so that I can lead them."

Of course, that description fits damn near every politician in the country right now.

Today, I got an email from Kerry that put out a proposal that really made me wonder what the man is smoking. He is proposing, and asking people to sign a petition supporting, a "plan" in which 20,000 US troops are withdrawn from Iraq following the December elections there. I don't care what side of the debate you are on when it comes to troops in Iraq. That plan is not only stupid, it is downright dangerous, and the man should know better.

The "premise" of the plan appears to be that elections in Iraq make things better when it comes to dealing with the insurgency. Personally, I think that the insurgents have done a reasonably good job of disproving that. They are more active some months than others, but there doesn't seem to have been any long-term trend toward a drop in their activity since the last elections there. Elections per se do very little to help the immediate security situation (the long term effects may be different, but that is yet to be seen). Using the election as a reason to pull out a limited number of troops makes no sense at all.

That's why the idea is stupid. It's also dangerous. In fact, it's even more dangerous than pulling out all of our troops. If we do that, I personally feel that we will be immorally reneging on the responsibility that we have to leave Iraq no worse off than when we started. However, American troops will no longer be at risk under that plan. Under the Kerry proposal, we will be left with a security situation that is probably no better than it was when we pulled out the 20,000 troops, but there will be fewer Americans on the ground. This, in turn, will place the troops that remain at an even more elevated level of risk than they are now.

Kerry, being both a veteran and a man who aspired to be Commander-in-Chief, should know better.
Posted by TQA at 2:55 PM 3 comments:

The Air Force Academy and Religion

A first ammendment lawsuit has been filed against the Air Force, over the issue of proselytizing. The plaintiffs in this case, including four active-duty officers who are recent graduates of the Air Force Academy, feel that they have the right to not be exposed to proselytization while on duty. The same set of guidelines that lead to the lawsuit have also come under fire from Christian Evangelicals, who feel that the guidelines go too far in restricting their rights to spread their religious message.

The relevant portion of the first amendment states, "Congress shall make no law respecting an establishment of religion, or prohibiting the free exercise thereof;". The problem in this case is that it isn't possible to satisfy both clauses at the same time.

On one side, there is the issue of establishment, and the issue of coercion. Senior officers in the military have extrordinary power, particularly over those who want to be career military. A single bad performance review from a superior can totally kill any chances for future advancement. Not pissing off the boss is hugely important. Under those circumstances, it is difficult to see how an "invitation" by a commanding officer to pray at the start of a staff meeting could be seen as something akin to an order, or why subordinates would be very reluctant to say anything if the religious statements of a superior were making them feel uncomfortable. The commanding officer is the representative of the government, and given the nature of the military it is difficult to see how the governmental function could be overlooked, particularly during duty hours. That is a de-facto establishment of religion. On the other side, there is the issue of free excercise. Evangelical Christians believe that it is their religious duty to evangelize. If you tell a commanding officer that he cannot tell his subordinates about his religious beliefs, you are restricting his right to freely excercise his religion.

This is going to be an interesting case to follow.
Posted by TQA at 11:00 PM 2 comments:

The trip to Maui was very interesting. I didn't actually get to collect anything, but I now have a much, much better idea of what not to do next time. In science, that can sometimes be almost half the battle right there. I'm wading through hundreds of inbox messages, but might have something worthwhile to post later today.
Posted by TQA at 1:10 PM No comments: