A few months ago, I wrote an article on this blog about the plight of a genus of trees out here in paradise that are being decimated by an accidentally introduced wasp. The trees targeted by the wasps include several species of trees from the genus Erythrina, which includes a species that is unique to Hawaii - the Wiliwili (Erythrina sanwichensis). This tree has a great deal of cultural significance to native Hawaiians, who have traditionally made use of the wood in many areas of their culture.

Just to review, the parasitoid wasp attacking the trees was first spotted back in April in Manoa valley, but has since spread to all of the main Hawaiian Islands. It attacks the trees by laying eggs in the leaf tissues, creating a bump in the leaf called a "gall," which looks like this: 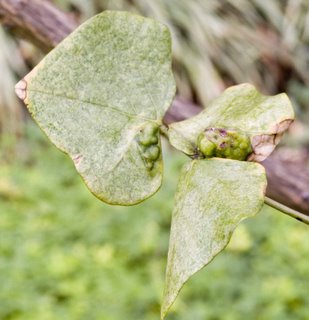 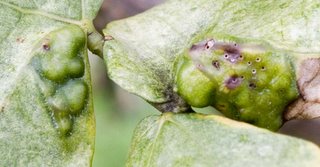 The holes that can be seen on the leaf to the right are emergence holes, where adult wasps have emerged from the leaf after maturing.

Too many galls on the same leaf can kill the leaf, and too many dead leaves can kill the tree. These gall wasps can also invade the leaves just as they are starting to open. When this happens, the leaves do not develop normally, but instead form twisted, malformed masses of tissue, like this: 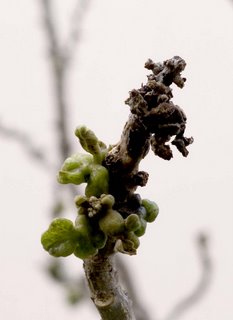 If the wasps are still around once all of the leaves are dead, they can apparently continue this process as long as the tree is able to continue to attempt to put out new leaves:

At the beginning of October, I took pictures of trees from a number of Erythrina species that are found around campus, and on a couple of other places on Oahu. The pictures are not pretty. I've waited this long to post them because I was holding out hope that the leaves might still come back - the trees of this genus are deciduous, and some drop their leaves during the summer. They have not. All of them look worse now than they did when I took the pictures.

There are "before" pictures available for a couple of the same trees that I photographed, via Dr. Gerry Carr's website at UH. As you can see, the differences are drastic: 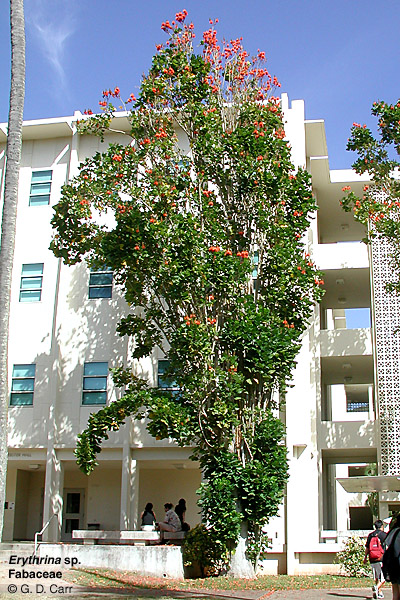 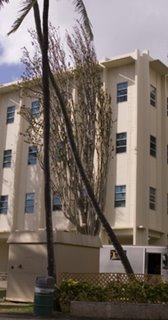 The two pictures above are of a "Column Tree" (Erythrina sp.). Both pictures are of the same tree, one of three planted in front of Webster Hall on the UH Manoa campus. All three of those trees have been decimated, and I have seen other trees of this species in the same shape at Hickam Air Force Base. 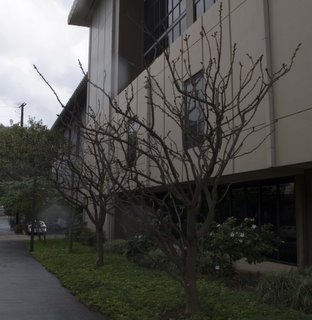 The three trees in this picture are all Wiliwili trees (Erythrina sandwichensis). As you can see, they have been hammered as hard as the column trees. I've seen Wiliwili in this condition as far as the Leeward Coast. The area on the leeward coast is a good 20 miles away from Manoa, as the wasp flies, and the insects have only been known to be on the island for about six months. That's a terrifying rate of spread. If it continues, the extinction of the Wiliwili is all but inevitable.
Posted by TQA at 8:10 PM